Menu
Log in
That was quick! NBN to get a major upgrade...after 10 years

What started as an idea on the back of the coaster between then Prime Minister, Kevin Rudd and Communications minister, Stephen Conroy, the National Broadband Network is now 12 years old and getting a major upgrade with the politics that has surrounded Australia's broadband carrier finally subsiding.

The vision for the NBN was the correct one but the execution and lack of a cost-benefit analysis in the early stages of the project only enabled the NBN's critics to pursue a mixed solution model for the carrier which, while achieving a faster path to rollout, only delayed the inevitable need for fibre to the premise solution.

In 2007, Liberal Prime Minister, John Howard had signalled that demand for internet services among Australia's households and businesses was growing at a rate that prompted the likes of Telstra, Optus, TPG and Vodafone to lobby for more than $8 billion in infrastructure upgrades to path the way for the digital leap.

The political 'mudslinging' has fault on both sides and only highlights the need to ensure that nation building projects are signed off by the likes of an Infrastructure Australia as opposed to partisan committees.

The digital transformation spoken about only 10 years ago has occurred at much faster pace than any academic futurist predicted and the upgrade to fibre to the node as opposed to the Malcolm Turnbull's hybrid fibre-copper model which sped up the NBN roll out is now needed rather urgently.

The rate of connection is taking place at 100,000 per month as the old ADSL networks incapable of handing the speed required for newer technologies are deprecated and the business community almost on mass are using cloud-based system and doing away with heavy equipment.

A cursory glance at the chart shows a moderation in the number of premises made available is moderating as the rollout of the network is completed. 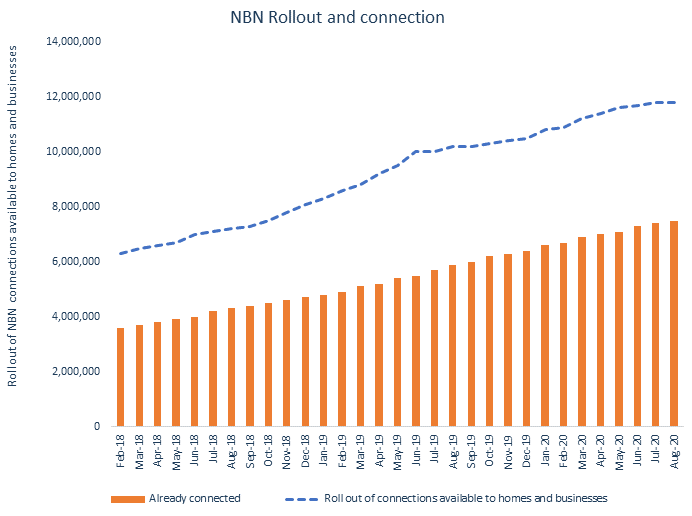 The NBN's mooted upgrade to speeds of 750 Mbps (a fast speed is considered 60-85Mbps currently) recognises that businesses generally can no longer afford a data network which is one of the top gripes for business.

Evolution and the way business is conducted is happening within years as opposed to decades and the need to be competitive is an issue that is in the national interest in not only a business sense but ensuring the students of today are equipped in the industries of tomorrow.

Engineering, medical, media and emerging gaming industry need a world class broadband network that is in the top 10 nations globally as opposed to languishing at 62 according to UK website, cable.co.uk.

There are more than 7.5 million businesses and home connected to the NBN with the connection availability nearing completion. The real challenge is taking an average network and making it truly world class.